Kaladin survived a miserable death as a military slave to be given command of the Royal Bodyguards. He’s been tasked with protecting the king and Dalinar from every peril while also being threatened by assassins that have yet unknown techniques or weaknesses- all this without knowing why Syl has chosen him specifically?

The Assassin, Szeth, has resurfaced once more and is slaughtering world leaders all over Roshar with his mystifying abilities. His prime objective is Highprince Dalinar, who many people believe to be the throne’s actual power. Dalinar’s leading role in the war is sufficient cause, but the Assassin’s master has more sinister goals.

Shallan attempts to avoid her family’s ruin. She is extremely bright, but she has a lot of problems. Despite being beaten in ways she refuses to acknowledge, she bears a tremendous burden: to try and prevent the return of the mythical Voidbringers and the planet-ending Desolation that would follow if they were let loose.

Meanwhile, the Parshendi, who dwell in the Shattered Plains’ center, are making a momentous decision. The Parshendi’s numbers have been declining for years owing to Alethi attacks and their fortifications becoming ever stronger. They follow Eshonai’s recommendation and gamble everything on a last-ditch effort to confront the supernatural forces they once fled. The repercussions for the Parshendi and humanity as a whole, as well as Roshar itself, are devastating and indeterminable.

So I was absolutely blown away by The Way of Kings, and Words of Radiance is right up there with the first. While I felt it did drag on a bit in places I still enjoyed this one completely, rating it 4 stars.

This book review will be all over the place since it’s been a while since I read it, and well, work got in the way so I didn’t get to write this immediately after reading with all my excitement.

My favourite part about this series and Words of Radiance so far are the characters and their development, which is linked with the magic system, history, which are all fantastically wrap in politics and societal struggles. This is the hook for me! Everything is interconnected in some way, and I love sifting through the pieces and trying to guess what will come next.

On the note of guessing, Words of Radiance was a bit predictable, and usually, I’m terrible at making predictions. That said, I just shrugged it off and sat proud of myself for my accurate guess and enjoyed the rest of the book.

I have to mention that I don’t think it’s the most well-written fantasy out there, but it’s certainly one of my favourites right now with all its action and great characters. You’ve probably heard that Sanderson’s prose is dry, and that’s true. BUT there are so many things going on every chapter, sometimes every page, which makes for a very fast, entertaining read!

Another thing I loved but also hated was the interludes. These lifted up the story and gave us some insight into characters who will probably be more prominent in future books, without taking away from current storylines. That said, I struggled with them since I just wanted to carry on with the main characters in the main storyline and see where Kaladin and Shallan’s story went.

Shallan was a fantastic character who I loved reading about since The Way of Kings, she’s just finding herself. Her relationship with Kaladin continues to grow which I love, and her arc in this book was a fantastic one. She’s a strong woman who isn’t afraid to ask for help when she needs it, while still being able to defend herself. If you’d have asked me after Way of Kings if I would have liked Shallan as much as I did, I would have answered no because I really just wanted to see more of Jasnah. In this book, her character is developed more and I enjoyed reading about her immensely; I can’t wait to see her again in Oathbringer.

Kaladin also has a few twists that I couldn’t see coming which was fantastic since up until now he’s been set in stone as a character. He’s honestly my favorite and I’m so happy that Brandon decided to continue developing him and not just leave him as the tortured hero we saw in the first book. His story was fantastic, and his feelings for Syl were heartbreaking at times.

The magic system has been further fleshed out in this book and I’d say it’s a different magic system to anything else out there. Brandon has managed to come up with a blend of new aspects that make this world unique while still being based in some sense on the classic elements found in every fantasy novel.

The pacing was where things started to slip for me though. I felt like certain parts of the book were entirely too long, they dragged on and I found myself flipping the pages quickly to get through them. The reason for this is that they are heavier in information, there’s a lot of ancillary details about the world-building and magic system, which while important seem to be included throughout the entire book rather than focused on in certain sections. I found myself getting overwhelmed with information occasionally, particularly during the interludes. Again, I think this was just me struggling to start another story when I just wanted to read the main story.

Overall, if you’ve not started The Way of Kings, get it now, because this series just keeps getting better. Brandon Sanderson has quickly become one of my favorite writers this year. I can’t wait for Oathbringer! 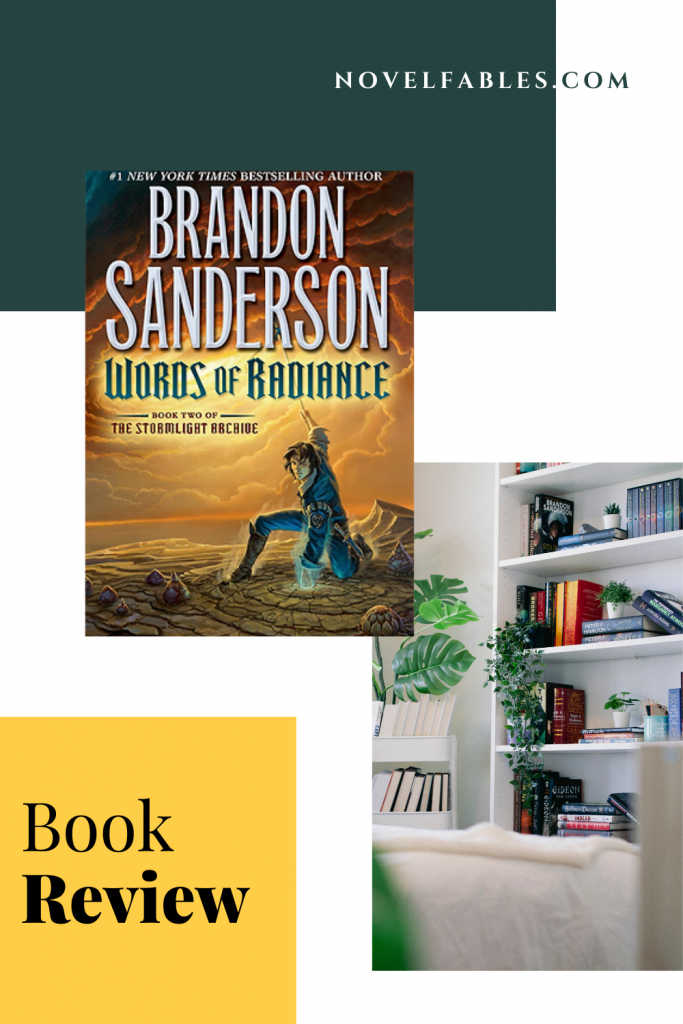 “He saw it in her eyes. The anguish, the frustration. The terrible nothing that clawed inside and sought to smother her. She knew. It was there, inside. She had been broken. Then she smiled. Oh, storms. She smiled anyway. It was the single most beautiful thing he’d seen in his entire life.”